The opening round of the 2021 Extreme Festival national racing series, run at Killarney International Raceway on Saturday March 20, delivered superb racing, spiced with all the drama the fans could wish for.

Van Rooyen took the lead in mid-race to take a career first win at Killarney with Wolk a close second, while Thompson posted his maiden podium finish with Temple fourth.

Originally planned as a 30-minute plus one lap enduro, race 2 was shortened to 20 minutes following delays in the programme. Van der Watt rapidly moved to the front of the field and built up a comfortable margin to take his first GTC race win. Wolk made it two podiums for the day by finishing second while Mandla Mdakane held off Temple in a race-long tussle to take his first podium finish since joining the class in 2020.

Liebenberg completed a perfect weekend with a win in race 2 after a race-long dice with runners-up Kruger and Mogotsi for the lead.

The podium battle also included Campos who was forced to retire near the end of the race.

The Volkswagen Polo Cup pack delivered the most dramatic moment of the day when Kwanda Mokoena made contact on the Porsche Club Straight on lap four of Race 1 and bounced off the wall back onto the track, just in time to be T-boned by Damian Hammond. The resulting destruction brought out the red flags and the race was restarted after a big clean-up.

Four laps into the restart Farhaan Basha lost it at 220km/h on the back straight, hit the wall and wound up parked sideways across the circuit, bringing out the red flags again. At that point the Clerk of the Course called time on the carnage and awarded the race to local hero Jurie ‘Umpie’ Swart, ahead of Leyton Fourie, Arnold Neveling and 14-year-old local rookie Tate Bishop. Swart again crossed the line in first place in race 2.

The Mobil 1 V8 Supercar brigade returned to Killarney after a seven-year absence with a win in race 1 for reigning champion Mackie Adlem (Adlem Auto Jaguar XKR) after a race-long duel with Terry Wilford (Fuchs Lubricants Ford Falcon) – but he had to settle for second in race 2 behind Thomas Reib’s Mobil 1/Café 9 Automotive Chevrolet Lumina.

Charl Arangies won two of the three G&H Transport Extreme Supercar races in his Stradale/Info Africa Lamborghini Huracan GT3 and was gifted the third when local hotshot Dayne Angel (Autohaus Angel Porsche GT ZR), who beat him by just 1.188sec in race 3, was handed a 30 second penalty for jumping the start. 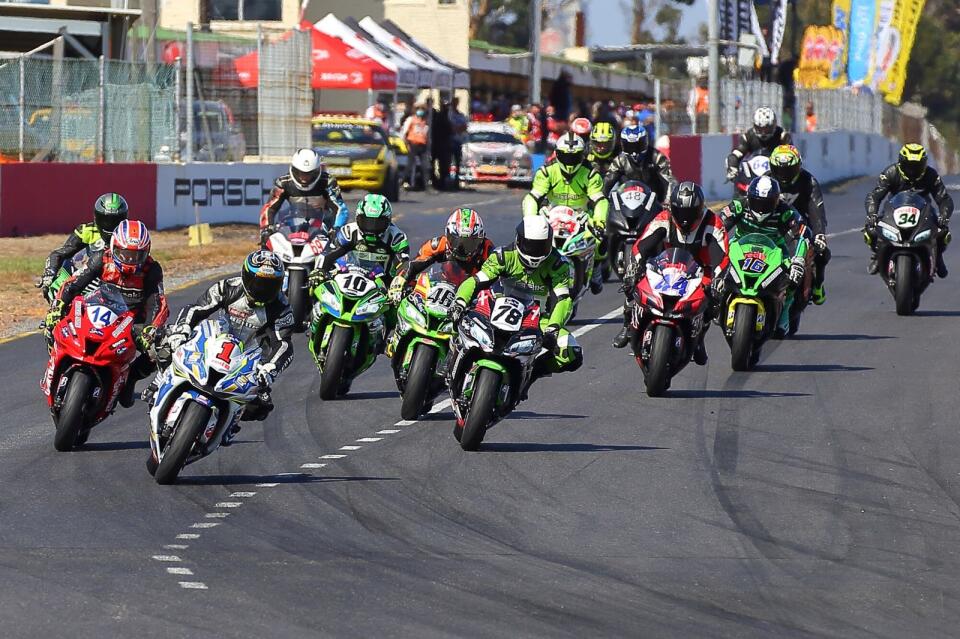 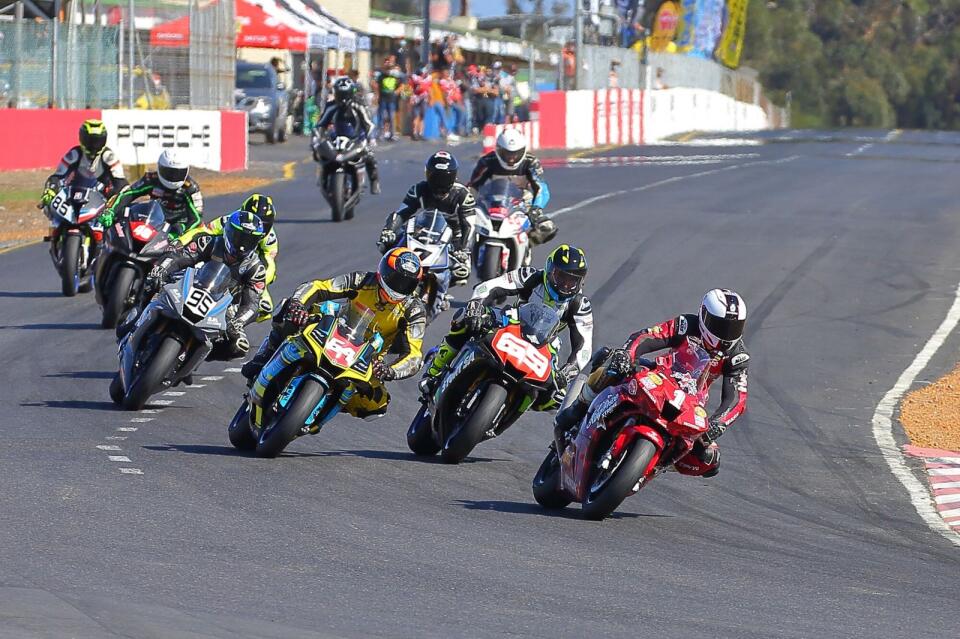 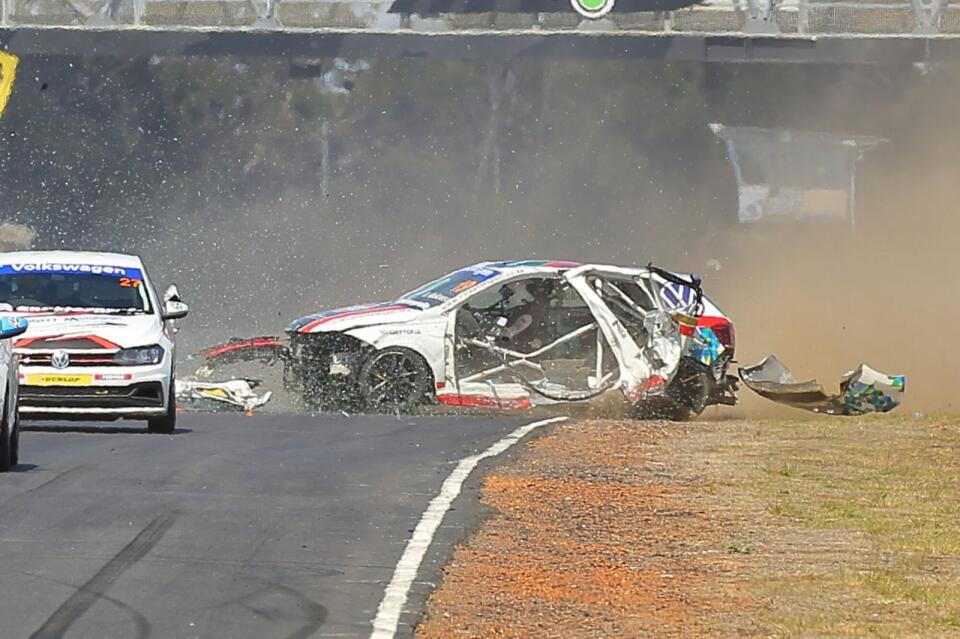 3/4: Chaos erupts as Kwanda Mokoena (19) gets T-boned by Damian Hammond (95) on lap four of the first Volkswagen Polo Cup race. 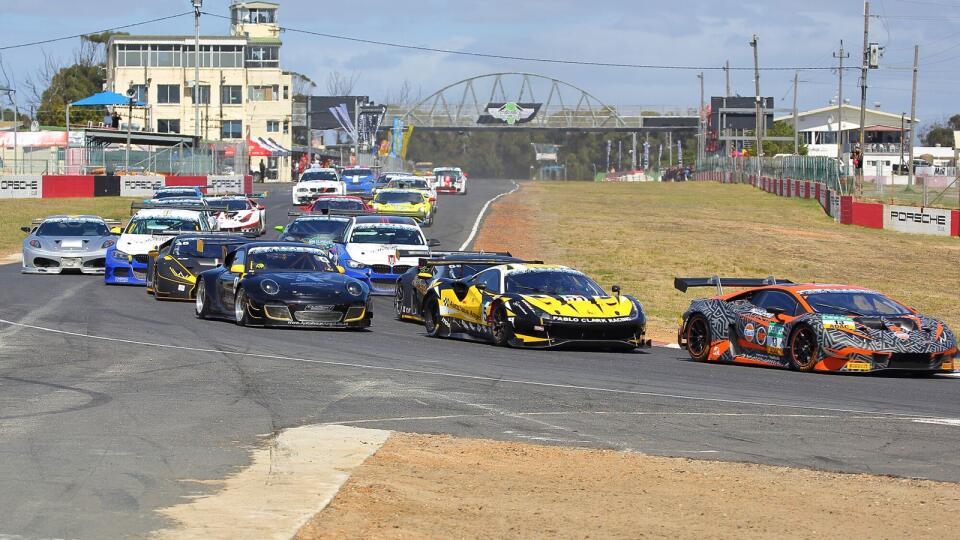